Reasons why you should get a Tesla

Highlights of why I recommend Tesla to everyone, after being an owner of one finally! 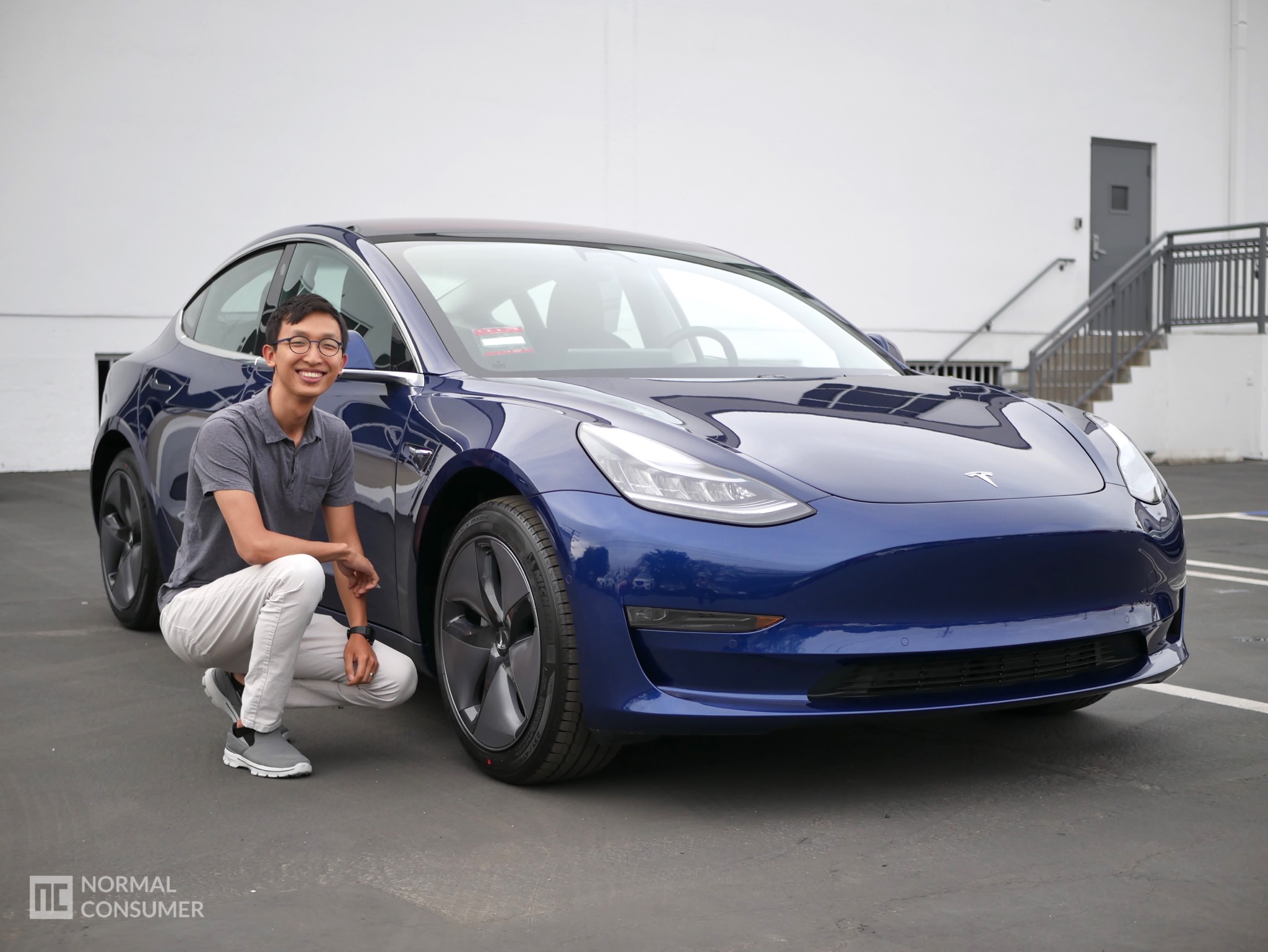 As a current owner of the Tesla Model 3, I’d like to share with you why I’ve come to like Tesla so much. In this single page, I’ll be covering both pros & cons that I’ve experienced as a skeptic who thought Tesla was just an expensive electric car, and now as an owner who’s a firm believer in the company and its cars. If you read through it all, I hope to have either convinced you to get one, or at least to know more about electric vehicles and see why they’re so awesome. I’ll break them down into categories, and cover as much as I can, but please feel free to leave a comment for any questions!

It’s fast, and I love it. If you’ve heard of “instant torque”, electric engines are able to provide as much power as you demand at the step of your pedal without any build up delay like an ICE (internal combustion engine) vehicles. Maybe you already have a fancy car that goes pretty fast, but coming from a very practical car like my Honda CR-V, being able to accelerate and get to 60 mph in seconds, is a joy that comes with an adrenaline rush. For the elderly or those who get nauseous easily, there’s a “Chill” mode too, that makes acceleration & deceleration more gradual and smoother. When moving slowly, you’ll hear no noise from the engine and it’s a dead silent ride. But when you punch it, the noise coming from the electric engine can be exciting too!

Every time I get notified of new software updates on my car, it’s more exciting than updating apps on your phone or updating some operating system on your computer. Normal cars will come with a set of features that never changes. But with Tesla, software update occurs on a regular basis where it brings new features, refinements, and bug fixes. This is possible because all new Tesla cars come with future-proof hardware such as eight cameras and sensors, and software is delivered OTA (over the air) with its LTE cellular connection that comes with the car. (Starting orders in July 2018, it’s now only one year of the premium internet, unfortunately, and $100 a year after that. However, the OTA updates will always be included) The car gets better over time with these updates, and now I’m waiting for the bird’s eye view and blind spot warning! I can’t believe the car doesn’t have some sort of blind spot warning already, but at least I know it’s coming in near future. Whenever the car is parked, it’s also able to connect to a local Wi-Fi so whenever I arrive home, it switches from LTE to my home Wi-Fi.

I use it on a daily basis, especially in stop and go traffic here in Los Angeles. You may have seen in the news about those who got killed in a deadly car accident while using “autopilot”, but the truth is that more people die in non-Tesla unfortunately, and you just don’t hear about it in the media. As a software engineer myself, I know to never trust any system 100% as there’s no perfect code, and there will be edge cases in various driving conditions and roads. It’s important to be on the lookout while using it so that you can take over when necessary. Besides the warnings negative press, it is absolutely an amazing feature that sets Tesla apart from its competitions. My wife has a long commute to work, averaging around 70 miles roundtrip, usually taking 2 hours with traffic. She would tell me that she’s less tired coming home, thanks to autopilot, and I believe it. I use it when I don’t have to get off the highway for an extended period of time, and I even use it on local roads at times.

Although I enjoy steering and driving myself most of the times, there’s a huge advantage in using the autopilot, and that’s safety.

Tesla builds very safe cars, maybe with the exception of the original convertible Roadster with an open top. NHTSA gave its cars all five-star ratings, and Tesla even released a video of a Model X going through a rollover test.

Although I hope you never have to experience anything like that, the fact that you’ll never be crushed by the car is a good thing. My favorite part of the safety comes from 12 ultrasonic sensors and eight cameras that allows the car to have access to 360 degrees around the car. Unlike the typical adaptive cruise control that speeds up and slows down depending on the car immediately in front of you, newer Tesla cars are able to detect up to two cars ahead. This is really great because when the car in front of the one in front of you slams on the brake for some reason and a potential accident is imminent, you’ll be notified with a warning, giving you more time to brake on time. But if you have autopilot on, it would take care of that for you. It took me some time to trust the system and let the car slow down on its own, but it works! With autopilot, it’s also supposed to move out of the lane when the car next to you tries to merge into you – I haven’t tested that out myself yet. There are also stories of current owners at a stop somewhere, noticing in the rear view mirror of cars coming at them really fast without slowing down, and avoiding the collision by accelerating away quickly. Hopefully, dash cam feature would come out in future software updates to have these unexpected events on record.

If you love technology like I do, this is the car for you. Although my Model 3 has a very minimal interior, the technology packed into the car is simply amazing. All Tesla, except for the original Roadster, comes with the ability to adjust so many things through the giant screen, such as:

Cost of Electricity vs Gas

A lot of complaints I hear about electric cars is that it’s inconvenient to stop by charging stations and wait while charging for a long time, unlike few minutes that it would take to fill up gas on a normal car. But ideally, you have a garage or a way to charge the car at home. In reality for me, I drive, come home, plug it in, go to bed, wake up, unplug, and drive, on repeat. Doing so, I never have to visit the gas stations or charging stations unless I have to go on a long distance trip. I also have friends who go to Tesla’s supercharging stations once a week, but it’s going to be inconvenient unless you have a way to charge the car at home.

Let’s break down the cost. I also wrote about it in an Instagram post but for me living in Los Angeles, CA, it costs me around $0.03536 per mile. In comparison to my older Honda CR-V that gets around 23 miles per gallon, at $3.50 a gallon, it’d be only 81 cents for same 23 miles. Over 75% saving! While the same math wouldn’t apply to everyone, hopefully, it gives you a good idea of the potential savings. That math comes from my typical driving habits and routes over 5,000 miles. Let’s say you have free charging at work, or you qualify for free unlimited supercharging (if you get a new car with my referral code, I’ll discuss this in a bit), then the more you drive for free, the more saving you’d get out of your car.

My electricity bill multiplied since getting a Model 3, but it’s been significantly less than gas spending. Of course, your bill would vary depending on your region and the electricity rates.

Why get one this year?

So you could get a new Tesla now or later, but why would I recommend getting one this year, and if possible by September 16, 2018? “Federal tax incentive credits” and “free supercharging”.

US government has been giving $7,500 tax incentives for many years now. But the catch is that when a car manufacturer sells 200,000 cars in the US, the amount will last until the end of the quarterly calendar year, and continue to cut in half every quarter. Although there’s been a bill proposed to extend it, the $7,500 credit has been officially announced to end after end of 2018, and will cut in half next year, etc. There are additional tax credit incentives for each state (Example: $2,500 for California), but that also depends on your income. Here in California, you need to make less than 150k as a single, and 300k for married folks, otherwise, you would only qualify for the federal credit. In total, many would qualify for $10,000 back as a tax credit, which works out as a discount on the cost of your car. I was really hoping the standard range Model 3 (220 mi range) would come out in 2018, so that the base $35k would cut down to $25k without any options, but I ended up getting a long-range Model 3 (310 mi range) because I wanted to take advantage of the full tax credit, and I’ve been wanting a Tesla for many years now.

I’m currently an owner of the Model 3, but if money wasn’t the factor, I would’ve gladly gotten the Model S. Tesla’s first car, the Roadster, was a limited item and it’s actually selling used for +$100k. I’d put that aside and consider newer vehicles only. The Model S is a midsized sedan that’s perfect for families. Model 3 has a pretty spacious trunk, but Model S has a trunk that is twice as large, totaling at 30 cubic feet including the front trunk. The fact that Model S and X has automated powered trunk is useful and I really wish the Model 3 had it too. Model 3 is a good option for two adults with kids in the back seats, but with more than two adults, the back seats will definitely get uncomfortable. Model S’ back seat is better, but definitely nothing like the X with three rows of seats. Model X has a total of 88 cubic feet of capacity, so you could imagine the size difference. Check out this article by Business Insider that has photos of capacity comparisons. While most features are shared within Tesla vehicles, Model S/X have air suspension, powered trunk liftgate, and Model X even has auto opening/closing doors in the front – fancy.

When I first heard about Tesla, I just thought they were expensive and that I would never be able to afford one. But after having test driven one, I fell in love with it and felt like I experienced the future. To know that the car will continue to evolve with software updates, is exciting for sure. I recommend you to call up a nearby Tesla store and make an appointment for a test drive, and you’ll better understand all that I’ve shared above. I’ve checked out Chevy Bolt, Fiat 500e, etc, but they’re nothing like a Tesla in my opinion. I’m excited for the next years to come as we’ll have more electric cars coming out of all car manufacturers, but until I find something better, Tesla, for the win! Feel free to ask me any questions, and please use my referral link. I hope you check out a Tesla soon :)